Episode 11: Home Automation and How To Make Your Home Smart

In recent years, the HGTV Smart Home has probably brought the most widespread media attention to home automation. For many, the idea of home automation is intimidating – how do you even get started anyway? Amazon Alexa? Google Home? None of the above? Well on today’s episode, we hope to alleviate some anxiety and demystify the illusion that home automation is inaccessible. You’ll hear it a million times – it’s all about convenience and it can be as complex or as simple as you want.

Note: This episode is really product heavy. If you want to skip down to check out a list of smart home products we’ve put together that we like, CLICK HERE.

Home Automation and How To Make Your Home Smart

Let’s talk home automation, affectionately referred to by us as “smart home stuff.” If you grew up in the era of Disney Channel original movies, one of your first thoughts when you hear “smart home” might be the movie Smart House. Classic Disney channel original right there. It’s funny, but in a lot of ways what was seen as the future in that 1999 movie IS HERE (apart from the crazy AI robot mom/maid lady…for now). There is something really cool about allowing technology to help you love where you live.

According to google, a smart home is “a home equipped with lighting, heating, and electronic devices that can be controlled remotely by phone or computer.” That’s pretty simple right?

We are kind of opposites a bit in the smart home department because Jeremy has done a lot of research and gets really excited about tech stuff, but Chandler is a bit of a late tech adopter. So in the interest of those of you who maybe feel more like Chandler, here are a couple key questions to get started:

Why should people care about making their home “smart”?

Convenience. We say it a million times throughout the episode, but home automation is all about convenience. Would you like it if your outdoor lights automatically turned on at sunset and off at sunrise? Would you like it if your thermostat switched from AC to Heat depending on the weather outside without you having to manually make the switch? Do you wish you could set a timer with a verbal cue while your hands are covered in baking goop instead of pressing buttons on your stovetop? There are a million ways that home automation can add conveniences to your life, and it’s all about what you want your home to be doing FOR you.

That being said, you don’t have to care about making your home smart. BUT if convenience is important to you, home automation is accessible to you and doesn’t need to be intimidating at all.

Do you have to be super tech savvy to do this?

Let me spell it out for you: N-O. NO!!! You do NOT have to be super tech savvy to integrate home automation into your home! Companies like Google and Amazon make products like the Amazon Echo and the Google Home that are incredibly easy to set up, attach to your wifi network, and get up and running in no time. You can make a home automation system that is really complex, but it can also be as simple as having Alexa help you out, or getting light bulbs controlled by an app. We’ll talk about all that below.

Feel free to skip this if you aren’t interested in the technical side of home automation.

So let me attempt to explain how this works. Say the first piece of a smart home is the smart device – a light bulb, an outlet, a thermometer, etc. Smart devices communicate with each other via their own languages and networks. For instance, some devices communicate over wifi. There are two other smart device networks that are pretty common, which are Z-Wave and Zigbee. Basically, Z-Wave devices can talk to one another and Zigbee devices can talk to one another, but a Z-Wave device and a Zigbee device can’t necessarily talk to each other because they “speak” different languages.

I’m not sure about Zigbee devices, but I know Z-Wave devices actually will work off each other to create a larger network the more devices you have. So for instance, if I have a light bulb at one end of the house and a light bulb at the other end of the house,  those two devices might be too far away to communicate with each other, depending on the size of your house. If you were to put a third Z-Wave bulb somewhere in the middle, that bulb would act as a signal repeater, so all three lights would be able to communicate with one another, basically expanding the reach of the network as a whole.

So in addition to your devices, you will probably also have a smart hub. A hub is essentially the brain of your smart home system – it is where you can store automations and how you connect your phone, tablet, or computer to be able to connect and control your smart devices. The hub also acts as a translator and a quarterback. Hubs can translate Zigbee to Z-Wave, Z-Wave to Zigbee, etc. Hubs are also the place where the automation commands are stored and executed – it’s the quarterback calling the plays.

There are a lot of devices that can serve as Hubs these days. Amazon Echo or Google Home can act as hubs, or there are dedicated devices that are smart home hubs. If you’re looking into this, you want to do your research to figure out:

Our Favorite Devices and Uses

So let’s talk about some of our favorite smart home equipment. Probably the most widely known smart home device on the market right now is Amazon’s Echo. If you don’t have one of these, let me tell you that it’s super easy to set up and really convenient to have around. We use ours in a lot of ways. We we use it to play music all the time, check the weather, keep up with our grocery list, and especially to KEEP TIMERS. We seriously use this feature all the time while we are cooking. It’s super easy to just ask her to keep a timer for us, and it can even keep multiple timers at once which is nice.

Another really nice feature of Amazon Echo is that it connects in with the Alexa app. That’s how we are able to keep grocery lists going because you can just say “hey Alexa, add ketchup to the grocery list,” and it keeps a running list on the app so you can reference when you are at the store. It’s pretty sweet! It’s also SO NICE to be able to use verbal commands with Alexa. No need to wash your hands to set a timer or write down a grocery list – just tell Alexa what you need and she’ll take care of it!

Not to pump the Amazon products too much here, but we really like our Fire TV Cube. It works as an Alexa (ie, voice controlled), but has IR sensors that can control your TV, soundbar, etc. So the FireCube remote becomes your master remote. We can verbally tell our TV to turn on, watch “The Office” on Netflix, or whatever! If you lose your TV remote regularly like we do, it’s really nice to be able to at least get things rolling verbally.

Getting away from the amazon products, I really like our smart bulbs. We get the Singled Smart LED soft white bulbs – they’re only like $10 – and they are simply dimmable/programmable light bulbs. They can be put on timers or schedules, dim from your phone, or triggered verbally from Alexa. It’s simple, but we really like being able to program the lights how we use them best – for instance there is a light that we always forget to turn off in our office, so I’ve just set it to automatically turn off at 11pm so we don’t have to worry about it! So simple,  but, again, convenience is the name of the game.

5 Simple Ways To Use Smart Devices In Your Home

A couple weeks ago on our blog, we detailed some really simple ways to incorporate home automation into your home. Be sure to check that out HERE! 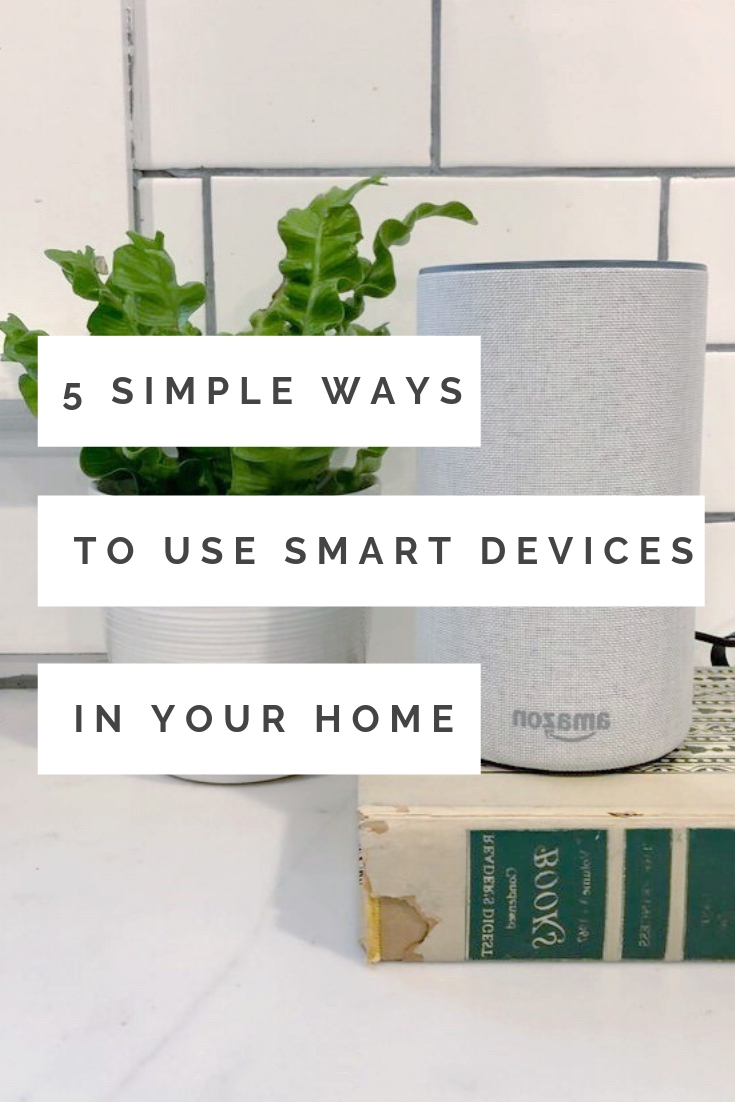 Just one final note on smart stuff: Amazon Echos or Google Homes or any device that listens to your voice – there are some privacy issues that arise. You want to make sure that you do your research to make sure your privacy is being protected in the ways you want it to be. You’re putting a device in your home that’s listening for your voice and presumably recording what’s going on…so make sure you’re ok with that and check your privacy settings to ensure that you really are keeping your privacy.

Stay current with all your favorite Love Where You Live episodes by subscribing RIGHT NOW! It’s SO easy:

Step 1: There is a big “subscribe” button right there on the show page in iTunes. Hit that to have all episodes automatically downloaded to your phone and stay up to date with the episodes we have coming out every week.

Just to make it even easier, here is the iTunes link that will take you right over to be able to subscribe, whether you’re currently on your phone OR computer.

THAT’S IT! So easy, and it’s really helpful for us. You taking 60 seconds to do this really means the world to us and we are so appreciative. Thank you. Thank you. THANK YOU!